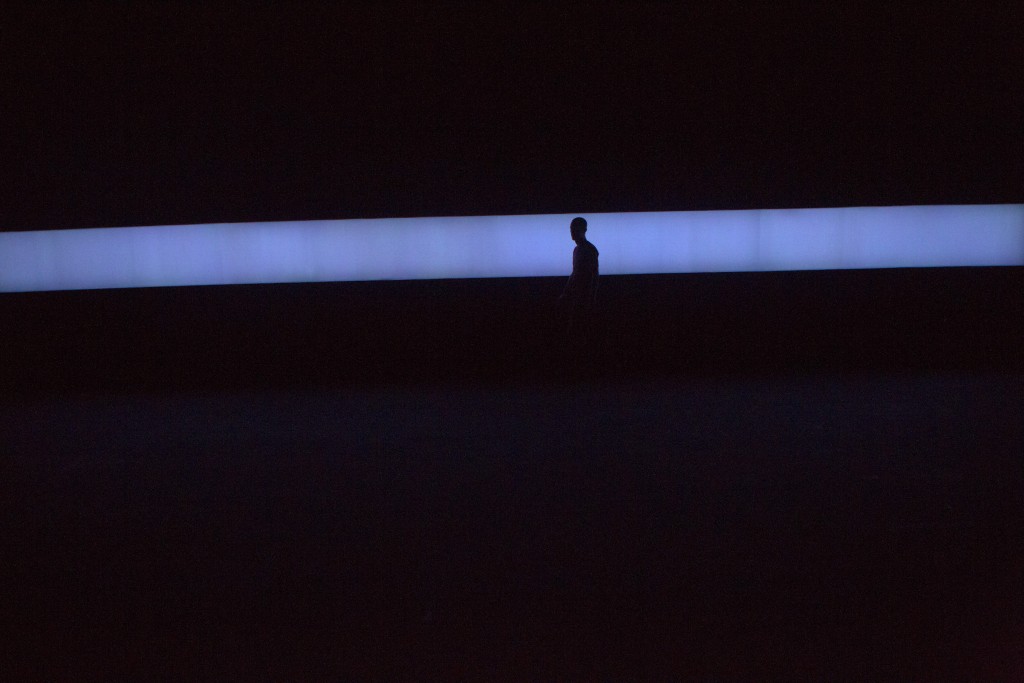 “An instant classic in 1999, Mark O’Rowe’s Howie the Rookie returns to Dublin almost a decade and a half on renewed and retooled as a solo performance directed by the playwright. It is, quite simply, an essential experience.”

Painful as such a cliché may sound to our jaundiced ears, how else could you describe the package Landmark Productions have presented us with? With recently much-befamed Tom Vaughan-Lawlor (from TV’s Love/Hate) as star and the original writer as director, it feels like must-see theatre, and it is.

The play recounts the stories of two Dublin youths who share a surname and intertwined destinies. ‘Howie’ Lee is roped by some friends into giving a beating to ‘Rookie’ Lee for miscellaneous insults received or perceived, but a strange sense of discomfort haunts him throughout the night, culminating in a devastating karmic blow. ‘Rookie’ then picks up the story and dives deeper yet into mystical fatalism. As his debt to a gangster seems to draw him to an inevitable demise, some unexpected turns bring ‘Howie’ back into his orbit at a wild party in Tallaght, setting up a violent climax and a haunting coda.

The play has lost none of its poetic ferocity in fourteen years, and in spite of one or two anachronisms such as the video rental outlet where John Woo’s Last Hurrah for Chivalry can be rented and the use of a payphone, does not feel like museum theatre just yet. Though much of the pre-production publicity centred on the re-framing for a single actor, truthfully this work was never about two sharply defined and different characters, but rather two thoroughly intertwined voices telling two intertwined stories (or is it just one?) from the same world on the same fateful night.

O’Rowe writes with extraordinary vividness and clarity. He moves between raw physicality and introspective mysticism with startling ease, never losing the idiomatic rhythm of West Dublin in the storytelling. He describes moments of tenderness and emotional confusion as clearly as he articulates instances of extreme violence and sexual aggression. He is as comfortable with black comedy as he is with detailed observation, and is as able to present scenes of reflective pause as he is moments of shock and action, and extends across both writing and directing.

Vaughan-Lawlor gives a performance as nimble as the text. He moves with the grace of a boxer, presenting the energy of the characters through a combination of physical and aural expressiveness that is, like the text, as genuinely controlled and poetic as it appears to be effortless. He is a captivating storyteller in himself, making use of a range of small changes in tone to present the depth and dimensionality of these characters. There is some differentiation between the two, but not so much as to pretend that this is anything other than a monologue. In the faces of ‘Howie’ and ‘Rookie’ we see gentle shading that increases the sense of metaphysical interconnection between the two souls, but Vaughan-Lawlor is at the centre of both. He prowls, dances, and dives around Paul Wills’ open set framed by a strip of light at the rear, carefully framed by pools of light (designed by Philip Stewart) that allow the story to take place in subtly different places, and the story of this night in Dublin is filled with living images created with one man on a bare stage. No doubt the production will draw curious fans on the strength of Vaughan-Lawlor’s name, but they will get a performance of genuine value that has nothing to do with celebrity.

If summer theatre in Dublin doesn’t quite attain the high profile glamour of the Broadway/West End, and theatergoers are ever-more persistently lured into cinemas to view HD streams of National Theatre presentations or other blockbuster presentations from London and New York, this production does demonstrate that the homegrown variety offers definite rewards. This presentation has all the feel of showcase theatre but the beating heart of the play is organic, resonant, and definitely worthwhile.

Harvey O’Brien is a writer and critic, and lectures in Film Studies at University College Dublin. His latest book is Action Movies: The Cinema of Striking Back (2012).