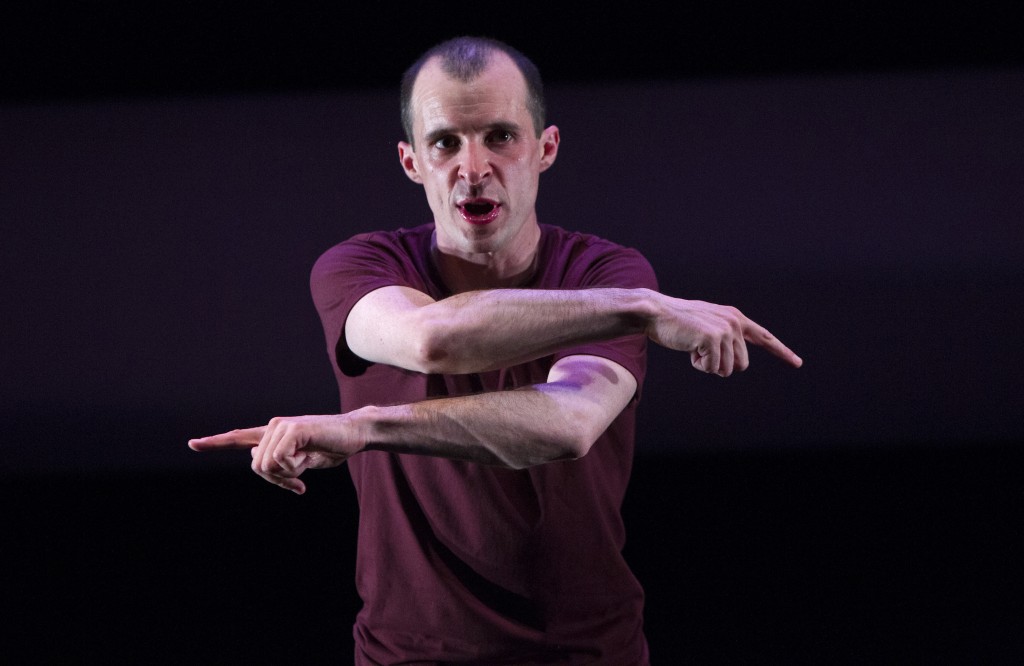 In Howie the Rookie, Tom Vaughan-Lawlor isn’t playing two parts; the brilliance of his performance is that he’s playing every part. Like the speaker of an epic poem, he is the sole figure that unites everything.

Nobody in Mark O’Rowe’s feverishly imagined Dublin underworld – where honour, revenge and brotherhood swell to epic significance – could ever mistake Howie Lee for Rookie Lee. The first is an inarticulate brawler, a fist for hire. The second, no relation, is a handsome lothario, itching up with infection, deep in debt, and short on luck. Now, in Landmark Productions’ riveting new production of the play, which was written in 1999, these two have been fused – and both are played by the astounding Tom Vaughan-Lawlor. That decision is O’Rowe’s, who directs Vaughan-Lawlor along two narrative paths that converge, the first told by Howie, the second by Rookie. This doesn’t make it a showcase for Vaughan-Lawlor’s versatility; rather, it underlines something that the play’s form, tone and pungent poetry knew all along. Vaughan-Lawlor isn’t playing two parts; the brilliance of his performance is that he’s playingevery part. Like the speaker of an epic poem, he is the sole figure that unites everything.

Despite O’Rowe’s startling picture of Dublin ganglands, there are actually keener shades of Homer’s Odyssey in the sweep of this telling, or of Joyce’s Ulysses in the elevation of ordinary detail into heroic form. Vaughan-Lawlor performs Howie and the Rookie as equally agile and expressive, distinguishing between the pair by changing merely his T-shirt. He is the storyteller.

And what a storyteller. O’Rowe’s text has the searing detail and exhilarating leaps of a shooting script (“I dive, I sail, I take him down”) where all images are vividly conjured in the mind. The flow of time can surge or subside, letting focus shift from a huge canvas to an intimate thought. The language pulses with action and scuffed lyricism.

The revelation of Vaughan-Lawlor’s entrancing performance is how his movements liberate the text further: tracing scattered coins with his fingers, twisting his frame with the pummels and parries of battle, or, in this production’s most electrifying moment, freezing mid dive like an heroic warrior, even as his amusing commentary undercuts the gesture: “I dive. Very smoothly.”

Designers Paul Wills and Sinéad McKenna provide a horizon of shifting blue light behind Vaughan- Lawlor, leaving the stage otherwise bare for a performance as finely executed as a dance. If the production recognises that less is more, though, it is the script that finally blows up into excess, paradoxically more thrilling in small details of shame or tragedy than the absurdly escalating calamities of its finale.

In the ugly overdrive of 1999’s Eircom shares and Ansbacher accounts, this story of idle angry young men in need of a code seemed strangely salient. Now, in a schismatic time of iPhones and austerity, this new production feels more so, where tensions and frustrations are again ready to explode.