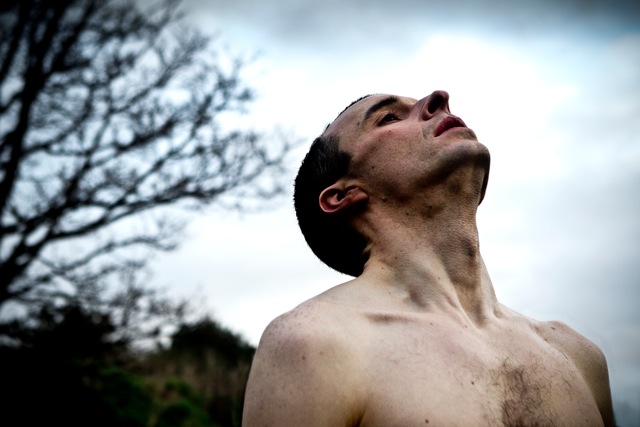 “The one man show – a daunting prospect for both audience and actor alike. A sole figure must fill the stage and hold an audience with their story resulting in an experience, which can land on opposite sides of the spectrum from sheer brilliance to painful to watch. This Landmark Production of Howie the Rookie has an added weight thrown into the balance.”

Written in 1999 by one of Ireland’s greatest modern playwrights – Mark O’Rowe (Intermission, Terminus) – the play was originally intended to be performed by two actors. This recent adaption sees one man –Tom Vaughan-Lawlor (better known as Nidge from Love/Hate) – tasked with telling the story of both Howie and The Rookie. Sitting in an audience, surrounded my most of the cast of Love/HateI wondered if this bold move would pay off.

I’ll cut to the chase. Howie the Rookie is a combo of brilliance – a masterclass in acting from Vaughan-Lawlor coupled with O’Rowe’s flowing words and gripping story. It’s about two young men living in Dublin City – Howie Lee and The Rookie Lee – whose stories are connected by more than their “namesake in Lee-ness”. In the first half, Vaughan-Lawlor is Howie (“a goer goes all the way”), sharing his part of the tale and in the second half he takes over as The Rookie (“a handsome c**t”) who picks up the narrative. With only a very slight costume change at the halfway point, he transforms seamlessly from one lead character to the next.

Along the way we meet an assortment of colourful characters from The Ladyboy (with “three sets of teeth instead of one”) to Avalanche (“A monster… Sixteen stone, size forties on her chest, few tats”). The story pelts along at a fantastic pace, thanks to O’Rowe’s beautifully crafted rhyming scheme and Vaughan Lawlor’s magnificent execution. He moves from space to space around the empty stage with sharp and fluid movements filling the emptiness with his presence. He takes hold of the audience from the word go and doesn’t let up until the story is told.

Set over two bleak and vivid nights, the story itself ranges from side-splitting hilarity to absolute heartbreak and what’s more you won’t see it coming – a testament to both the writing and performance. Vaughan-Lawlor will have you in a heap with his perfect comedic timing one minute and staring wide-eyed in horror the next. At times Howie the Rookie is an all out assault on the emotions, and yet the one man powerhouse just keeps going.

As I already mentioned Howie the Rookie was originally written in 1999, but there is no sign of this story dating. What O’Rowe and Vaughan-Lawlor have done here is something truly brilliant that should not be missed and the rapturous standing ovation, which they received was all too fitting. With runs in Dublin, Cork and Galway, there’s no excuse to miss the stand out piece of Irish theatre.